“Including yesterday’s graduates, just over 2000 students have graduated to date, each of them gaining the knowledge and confidence to go out and seek jobs that would otherwise never have been possible,” says Sheryl Casalis, training director of Added Advantage Academy.

The Engen Computer School offers South Durban residents introductory-level computer skills training, covering eight units of the National Certificate: Information Technology, End User Computing qualification.
To enrol, applicants must be unemployed school-leavers and reside in South Durban. While matric and age criteria are not prescribed, most students who attend the school are aged from 20 to 40. 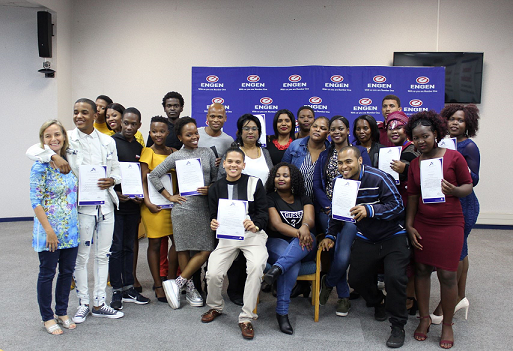 According to Casalis, three four-month courses are offered per annum, each accommodating 80 people. Engen invests approximately R15 000 per student to attend the course.

“The competency rate for students is between 94% and 99% by the time they complete the course,” adds Casalis. “Upon graduation they are computer literate individuals able to work independently using the most common computer programmes utilised in offices today.”

The third course for 2019 commenced on 26 August and has 78 attendees.

Engen’s head of Transformation and Stakeholder Engagement, Unathi Magida, says the Engen Computer Centre is well known in South Durban and almost always has a waiting list of people wanting to upskill themselves.

Magida says Engen is both proud and humbled to play a small role in positively changing lives of South Durban community members, who reside in an area where the Engen Refinery is located.

“With poverty and unemployment rife in South Africa, Engen is cognisant of the fact that the government cannot be relied on to provide solutions alone,” says Magida.

“As such, we are committed to stepping up and doing the right thing, starting with paying special attention to the people in the communities in which we operate,” she adds.