At its office launch, headlined by the demonstration of its 4D cleaning showroom, i-team South Africa showcased how its innovative cleaning technologies usher in a new era in cleaning.

Having announced itself to the South African market at this year’s ISSA Cleantex Africa, which took place at Gallagher Convention Centre in Johannesburg from 04-06 June 2019, i-team South Africa took the next step by officially launching its local office on 27 September 2019.

Located at Woodhill Office Park in Meyersdal, the new office’s major talking point is the 4D cleaning showroom. It also boasts various floor types which allow clients to put i-team’s cutting-edge cleaning technologies through their paces for them to experience the outstanding capabilities first-hand. 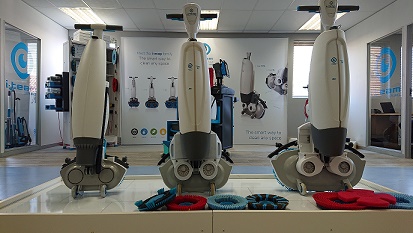 The i-mop Family on display at the launch

Henry Posthumus, Ambassador i-team South Africa, says the event highlighted how i-team South Africa changes the game in the cleaning industry. “I-team’s goal is to Inquire, Innovate and Inspire the cleaning industry to look at new ways to clean by looking at People, Planet and Profit. We can educate our clients to professionally monitor their results, and provide data they never had before,” says Posthumus.

Posthumus says this is an opportunity for i-team South Africa to put to bed all arguments about which machine solutions clean the floor better. He declares that the company’s i-mop will be the undisputed victor. The i-mop is relatively a compact machine that solves problems of floor cleaning systems by combining the flexibility of a floor mop with the power and speed of industrial scrubber driers. The i-mop family comprises three models – the i-mop Lite, the i-mop XL and the i-mop XXL.

“A key talking point on this range is that it cleans up to 70% faster than conventional wet mopping and is easy to use in small areas that don’t need an auto scrubber. The i-mop and its ability to get right to the edge and under obstacles means a virtual elimination of manual operations that are required to supplement conventional machine scrubbing,” says Posthumus. Other products on show at the office launch included the i-scrub, i-matt, i-vac, i-wash, i-gum, i-land, i-suit, i-fibre, i-light, i-power and i-know.

However, i-team also used the event to showcase its unique 4D REAL (Reduce Expenses and Liabilities) Clean approach. “We think about solutions throughout the whole spectrum of cleaning. We don’t just purely focus on technical floorcare,” says Posthumus.

He explains that i-team’s four dimensions in cleaning cover four areas: floors (1D), surfaces (2D), walls (3D) and ceiling & air (4D). The four dimensions influence how clean a room is. If the focus is on a single dimension, the dirt from the other dimension will infect the clean area again.

“For example, by using a standard scrubber dryer, we are polluting the air in the building by pushing bacteria, fungi and viruses back into the air. These have been growing in the tank overnight. In another instance, by using a trigger spray with today’s chemicals, one is bringing VOCs (volatile organic compounds) into the air which will be inhaled by the cleaner, causing the same lung damage as being a chain smoker, according to a Norway government study),” says Posthumus.

In conclusion, Posthumus says traditionally, cleaning has been about removing dirt, wastes or unwanted things from the surface of objects using detergents and necessary equipment. However, cleaning has since evolved and now encompasses both the removal of physically observable matters and the removal of microorganisms. “By continually collecting customer feedback and exploring the latest technologies, i-team has brought in a new age of holistic cleaning,” concludes Posthumus.