Originally launched in 2010, to-date ABB’s Power2 two-stage turbocharger has been successfully deployed in the large engine industry with installations spanning the power generation and marine sectors. Power2 was developed in response to engine builders’ demands for reducing harmful emissions and greenhouse gases combined with higher levels of power density and fuel efficiency.

Currently, many countries are investing in the expansion of their railway infrastructure and rolling stock. Diesel locomotives continue to play a key role in this expansion, particularly where flexibility is required and ambient conditions are difficult. Increasingly stringent emission regulations are also driving the need to modernize the locomotive fleet. 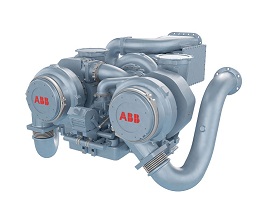 ABB’s Power2 technology has been enhanced for use in the toughest rail applications. Now compact in size for optimal use in the rail sector, the outer dimensions of Power2 have been minimized while the swallowing capacity of the machines has been maintained. Closer attention has also been paid to enhancing the design for serviceability. Power2 for locomotives is also durable and optimized for cyclical applications in order to fit to railway overhaul schedule.

Turbocharger maintenance intervals have been aligned with major engine overhauls due to extended time between overhaul (TBO). This has been reached through the introduction of features that lead to reduced wear and tear from high thermal- and mechanical cycles, to benefit operators by reduced life cycle cost.

Installed as a three-turbocharger configuration, it’s size to performance ratio is up to 25% lower than four-turbocharger two-stage solutions. The technology delivers unrivalled flexibility with guaranteed consistent operational performance over the large range of ambient conditions in which locomotives are required to operate. For example, the system can support engines to generate 80% power at altitudes as high as 4000m above sea level, and in temperature variants of -40°C to +40°C, without users having to de-rate the engine.

ABB expects two-stage turbocharging technology to become increasingly established in the market as the need for efficiency and power density continues to grow in the future, as it has in the past 100 years. For this reason, ABB has developed a full range of products extending the present Power2 offering to locomotive use and covering the full range of locomotive engines from <1 to 3 MW per turbocharger. Alongside these products, ABB is testing predictive maintenance services to sustain the highest levels of turbocharger performance, these being supported by, and through, the use of digital data technologies.

ABB Turbocharging (www.abb.com/turbocharging) is at the helm of the global industry in the manufacture and maintenance of turbochargers for 500 kW to 80+ MW diesel and gas engines. Our innovative leading-edge technology enables our customers to increase their performance; producing lower emissions and improving fuel consumption even in the toughest environments. Approximately 200,000 ABB turbochargers are in operation across the globe on ships, power stations, gen-sets, diesel locomotives and large, off-highway vehicles. We have over 100 Service Stations in more than 50 countries globally and a wide service portfolio that guarantees Original Parts and Original Service anytime, anywhere.

ABB (ABBN: SIX Swiss Ex) is a pioneering technology leader with a comprehensive offering for digital industries. With a history of innovation spanning more than 130 years, ABB is today a leader in digital industries with four customer-focused, globally leading businesses: Electrification, Industrial Automation, Motion, and Robotics & Discrete Automation, supported by its common ABB Ability™ digital platform. ABB’s marketleading Power Grids business will be divested to Hitachi in 2020. ABB operates in more than 100 countries with about 147,000 employees.
www.abb.com