The festive season is generally accepted as a time spent with family, friends and loved ones partaking in meals, activities and exchanging gifts. However, for many disadvantaged children the holiday season brings little happiness or sense of unity. Recognising the plight of these children, Atlas Copco- Home of Industrial Ideas, decided to brighten up disadvantaged children’s’ festive season by donating Santa Shoeboxes to AMCARE Alberton.

AMCARE was founded by the Alberton Methodist Church in 2002. The non-profit organisation (NPO) which originally began to provide relief for those living with HIV/Aids in the New Redruth area, has steadily grown to provide additional services. AMCARE aims to educate, inform and care for people so that they can empower themselves, by offering support and relief effort services which are divided into four programmes; Victim Empowerment Programme, HIV/Aids Programme, Elderly Care Programme and a Skills Development Programme. The organisation strives to be a leading faith-based centre serving communities in its surrounding areas.

“We wanted to help give the children a memorable Christmas because we know how a gift can go a long way in making kids happy,” states Wendy Buffa-Pace, Corporate Human Resources & Communications Manager at Atlas Copco. “We donated twelve Santa Shoeboxes to the organisation which not only contain a toy and sweet, but also daily necessities such as stationery, a toothbrush and clothes.”

Determined to spread festive cheer to the children, Atlas Copco representatives set off to AMCARE Alberton on 04 December 2018, the team included Bongani Ndlovu: Corporate Social Responsibility Manager and Executive Assistant, Noluthando Zondo: Communications Professional and eleven interns; Mando Makama, Mpho Tembe, Theresa Lesita, Dudu Lukhele, Adam Sibiya, Mzwandile Kubheka, Cheslin Scheepers, Asithandile Makile, Kate Temeku, Mbalenhle Motaung and Sizwe Magugu.
The Atlas Copco team was warmly welcomed and taken on a tour of the premises. Subsequently, the Atlas Copco interns had the opportunity to interact with the AMCARE staff and engage with the children whilst handing out the gifts. Although this was the first year that Atlas Copco donated Santa Shoeboxes to AMCARE, the company has initiated various projects in support of AMCARE beneficiaries such as a school stationery donation for the children who receive services due to domestic violence. 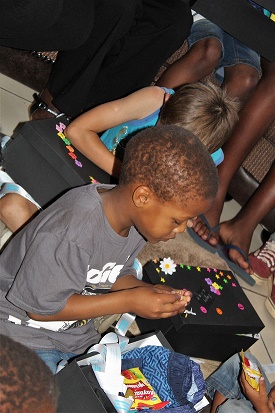 “During our tour we got to see how AMCARE assists these children to feel right at home in a safe and loving environment,” notes Zondo. “It was really amazing to see how the children enjoyed the interaction with the Interns. The Atlas Copco team had a very good time at AMCARE and the children and staff were so welcoming and appreciative.”

“Christmas is a time where children should be allowed to be children, and even for one day have the opportunity to be spoilt, rip paper from gifts, and have their hearts fill up with joy,” says Nadine Mason, Marketing Manager at AMCARE. “But for the generous donation from Atlas Copco, our children may not have experienced this kind of joy, play and laughter at Christmas time. On behalf of the beneficiaries which AMCARE protects through our victim empowerment programme we thank Atlas Copco for making Christmas extra special for these children.”

According to Mason, it is through this generosity and kindness that AMCARE is able to give hope which encourages the strength these children require to face their daily challenges. Mason adds that the organisation is in urgent need of grocery buckets, JoJo cans to harvest rain water for vegetable gardens as well as stationary, especially paper for printing.

“Atlas Copco is dedicated to giving back to the community and we are proud that we were able to make a difference to the AMCARE children’s holiday season. We endeavor to continuously strengthen and enhance relationships with our community, customers and dealers,” concludes Buffa-Pace.