The new school year brings excitement and anticipation to learners, who begin to gear up to further their knowledge. An important part of this preparation is purchasing new uniforms and school shoes. However, for many underprivileged children the cost of new school shoes is an expense which their families cannot afford to bear. As a result, many children from disadvantaged communities walk long distances, barefoot or in worn-out shoes, to reach school. As a socially conscious company, Atlas Copco – Home of Industrial Ideas – decided to assist in alleviating this issue by donating school shoes to two schools in Watville, Isaac Makau Primary School and Ekukhanyeni Primary School, as well as to AMCARE Shelter in January 2019.

“This school shoe initiative was started by Atlas Copco Communication Professional, Noluthando Zondo together with Communication Intern Mando Makama, who began collecting school shoes from Atlas Copco employees in Q4 2018,” states Wendy Buffa-Pace, Corporate Human Resources & Communications Manager at Atlas Copco. “Our company participated in the initiative because we wanted young children from disadvantaged schools to feel the sense of pride and emotional upliftment that a pair of new school shoes can evoke.” 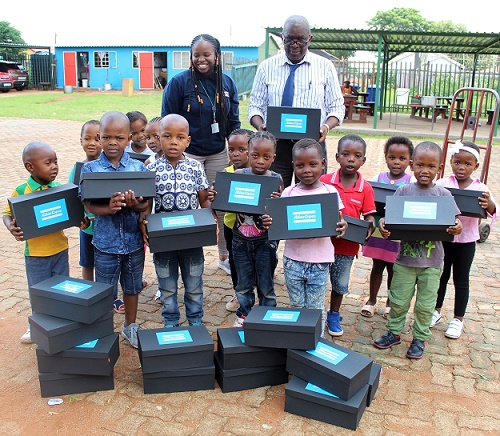 Isaac Makau Primary School and AMCARE shelter share close relations with Atlas Copco which enabled the company to identify their needs and offer them support in the form of school shoes.

Touched by Ekukhanyeni Primary School’s name, which means ‘a place of light/hope’, Atlas Copco wanted to meet their efforts by bringing light and hope to a learner’s, despite the many challenges that they face.

Ekukhanyeni Primary School which opened its doors 56 years ago, received nineteen pairs of school shoes. “We are truly proud and appreciative to have received this donation which greatly assists our learners,” affirms principal, M.S.A Hadebe.

Eight pairs of school shoes were donated to the AMCARE victim empowerment centre which protects women and their children, providing them with support after escaping and surviving domestic violence.  “Thank you for making a difference in how these children viewed their first day of school; they step out each day knowing that Atlas Copco made a world of difference in their lives”, comments Nadine Mason, AMCARE Marketing Manager. “AMCARE would also like to thank the Atlas Copco staff who engaged and showed a real eagerness to build a relationship with the children.”

According to Zondo, the handovers were truly an encouraging and heart-warming experience. “The children were indeed happy and appreciative of their brand new shoes. It was really an honour for Atlas Copco to see the impact that this initiative was making in each of the children’s lives.”