There remains a serious shortage of women in engineering. Globally, it is still a male dominated field. According to the Engineering Council of South Africa, only 11% of the total number of engineers registered with them are female and only 4% of those are professional engineers. Portia Magongoma (32), AVK PVE Production Foreman, is making a difference and inspiring other women to pursue careers in engineering.

Raised in Pinetown, KwaZulu Natal, Magongoma has a Bachelor of Technology degree in Mechanical Engineering and recently graduated with a BA in Business Administration, both from the University of Johannesburg. She also has a National Diploma in Mechanical Engineering, a Certificate in Operations Management, and is a trained forklift operator. A registered member of the Engineering Council of South Africa (ECSA), this mother of two says: “It is possible to have both a successful career and a family.” 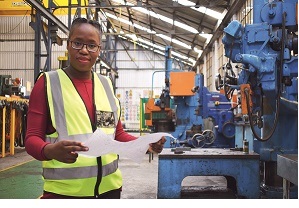 As a newly qualified engineer, Magongoma’s first job was on-site at a platinum mine. “I was, young, female, on my first job, having to give instructions to older, experienced men on a mine!” She recalls how language was the biggest barrier. They spoke Tswana and Afrikaans – she spoke Zulu and English. “I was giving instructions and discussing safety protocols – the message had to be perfectly clear.” So, she learned the languages. More and more, her gender and age ceased to matter. What was important was her confidence and ability to do the work well.

When Magongoma moved to AVK Valves, her experience was very different. “I was far more experienced, had already worked with men and gained confidence in that space,” she says. “AVK Valves has been incredibly supportive – of me, my studies, and my vision. They have played a huge role in where I am today.” AVK Valves funded Magongoma’s BA Administration degree and she’s looking forward to giving back to the company through her new knowledge, expertise and by inspiring other women to follow their dreams. She says she’s been seen and treated as an individual and not just an employee. “Some people think women can’t do this and can’t do that”, she says. “AVK Valves and Gunric never had those stereotypes. Women can do anything, just like men.”

As the first one in her family to graduate from University, Magongoma is incredibly proud to be where she is. “I have two children – a daughter and a 4-month-old son – and I will always teach them that anything is possible if you put your mind to it and are committed.” Yes, there are challenges – she has faced them and overcome them — but the key to success is to know what you want and focus on the goal, rather than the obstacles.

Magongoma’s vision certainly doesn’t end there. She was drawn to engineering because of its diversity. “I want to be an expert in valves – every aspect from design to production and quality assurance,” she enthuses. “I love working with my hands and really enjoyed my time on the shop-floor.” Now she has her sights set on bigger things. “I have combined engineering with business administration and management because I want to know everything there is to know about valves and the business of valves. From all the engineering to HR, labour law, finances – all of it!”

Change is certainly defined by those who drive it. “The only thing that convinces people that they can reach their ‘impossible’ goals is to see a role model actually doing it.” Portia Magongoma has high hopes for the future. With her energy, passion and dedication, she is set to be a pioneer in the engineering industry.