New South African legislation decrees that by April 1, 2020, existing plants must comply with Minimum Emission Standards (MES) for new plants in terms of meeting NOX (Nitrogen Oxides) levels of less than 350 mg/Nm3. Some nitric acid plants are already compliant with the 2020 MES standards in terms of NOX. However, for other plants compliance with NOX emission requirements is border line, making it necessary to put new technology in place. 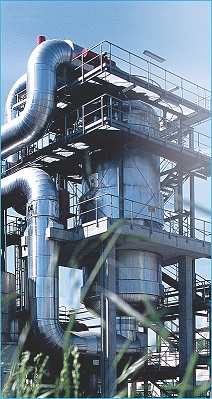 In chemistry, NOX is a generic term for the nitrogen oxides that are most relevant for air pollution. Nitrous oxide (N2O), commonly known as laughing gas, is produced as a by-product in the manufacture of nitric acid, an important raw material used among other things to make fertilizers. Nitrous oxide is a potent greenhouse gas implicated in the destruction of the ozone layer.

“Operators are under increasing pressure to produce more and more efficiently both from an operational cost and environmental point of view,” notes Neville Eve, General Manager of thyssenkrupp Industrial Solutions South Africa’s Process Industries business. “To meet the challenge of managing emissions to minimum levels and still be up on production requires proven technologies that allow cost-effective set-up and operation and at the same time make a significant contribution to environmental protection.”

The EnviNOx® process from thyssenkrupp is capable of almost completely removing NOX – and if required the greenhouse gas N2O – turning it into harmless nitrogen and water. The technology has been proven on an industrial scale with around 30 plants using the EnviNOx process around the globe. Two of these plants are located in South Africa. thyssenkrupp is the licensor of the nitric acid process for five of the six nitric acid plants in the country. The earliest EnviNOx unit has been in operation in a 1,000 tpd (tons per day) nitric acid plant in Linz, Austria, since 2003. The first unit on the African continent came on stream three years later in a 1,830 tpd nitric acid plant in Egypt.

The EnviNOx reactor removes NOX through a process not dissimilar to what is used to reduce emissions in modern vehicles, namely selective catalytic reduction (SCR), which uses a catalyst and a small amount of ammonia in the reaction process.

While SCR technology is already used by a number of suppliers, thyssenkrupp stands out as having successfully developed a reactor and catalysts specifically for the abatement of both N2O and NOX in nitric acid plant tail gas. “The N2O and NOX removal rates of our EnviNOx technology, which was developed by thyssenkrupp in Germany in the early 2000s, have been proven commercially to be very high, achieving N2O removal of up to 99% plus reducing NOX emissions to nearly zero,” states Bruce Bassett, Process Industries’ Senior Manager.

The central component of the EnviNOx system is the reactor. It contains a special catalyst developed by thyssenkrupp and its partners and is typically located between the final tail gas heater and the tail gas turbine.

The combination of N2O and NOX emission reduction in a single reactor vessel makes EnviNOx extremely flexible as it gives end-users the option of initially investing in NOX reduction only leaving open the option to upgrade to N2O abatement at a later state. thyssenkrupp recently secured a contract for engineering and procurement to retrofit EnviNOx technology at one of South Africa‘s nitric acid plants. “As the customer initially only requires NOX emission reduction we will supply the EnviNOx ready solution to treat the tail gas stream from their nitric acid plant. If and when more stringent South African legislation on the abatement of N2O comes into effect, we can simply add a second catalyst to the customer’s reactor.”