Engen in partnership with the Department of Energy and the Bushbuckridge local municipality officially launched an Integrated Energy Centre (IeC) in Bushbuckridge, Mpumalanga on 12 April.

South Africa’s Department of Energy (DoE) gave a mandate to all major South African oil companies to contribute towards job creation and community development. As part of its Integrated Sustainable Rural Development Plan, the government identified Integrated Energy Centres (IeC) as one of many economically sustainable solutions to address poverty nodal areas. 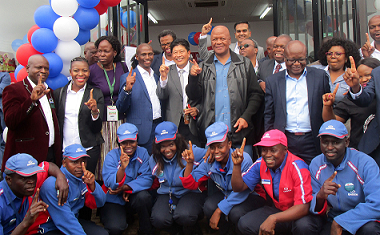 The roll out of the IeC programme is one of the vehicles that the DoE has embarked upon to contribute to rural development and the fight against poverty.

Commenting at the launch ceremony, Mr Jeff Radebe, Minister of Energy said: “I sincerely appreciate the funding of approximately R18 million from Engen in setting up this facility. I also want to congratulate Engen in completing their first IeC project and encourage them to do more.”

Engen responded to the DoE’s call to build the IeC, as it dovetails with their Black Economic Empowerment ethos –  as a company that embraces transformation as a key enabler for socio-economic change.

“This Integrated Energy Centre has been donated by Engen for the people of Bushbuckridge and the surrounding areas,” said Engen Managing Director and CEO, Yusa’ Hassan in an address at the opening. “It is our sincere hope that the residents access and benefit from the affordable and safe energy services that the centre provides.

Hassan assured the community that the IeC will be operated on solid business principles by a Trust, which includes representatives from the community.

“All profits from fuel and convenience sales will be placed into a trust account, run by three elected trustees, who have been approved by the municipality, Engen and the DoE. The trustees will identify relevant community upliftment projects to fund from the proceeds.”

Hassan added that it is Engen’s sincere hope that the IeC is a catalyst for the upliftment of the area, the growth of new businesses and the resultant employment opportunities they offer.

“During construction, 65 local people were employed for a variety of on-site jobs over a six-month period. On completion, 17 permanent positions were created, all of which have been filled from the local community.”

Hassan also paid tribute to government and the cooperative relationship that Engen has enjoyed with various ministries over the years.

“We recognise that the success of many social interventions rests on the ongoing cooperation between Engen and government. With the support of our shareholders – PETRONAS’ and Phembani – Engen will continue to make a constructive contribution to ensuring security of supply in South Africa and the ongoing transformation of the industry,” said Hassan.

The IeC in Bushbuckridge is not a profit centre for Engen. Rather all profits from fuel and convenience sales will be put into a trust account, run by the approved three elected trustees.

These trustees, who represent the local community, will help identity relevant community upliftment projects, aimed at giving back to the people of Bushbuckridge.

Located between Casteel and Acorn Hoek, the IeC operates as a service station offering fuel, diesel, paraffin and LPG gas, as well as a convenience store, which is open 24/7, and FNB and Capitec ATM’s.  The centre also houses an Internet café, providing members of the community with complimentary access to 12 computers, printing and scanning facilities, and free Wi-Fi.