Jeshika, who is passionate about the consulting engineering industry, has 11 years experience in the planning, design and implementation of water and sanitation infrastructure projects. She sees herself as an advocate for change, working closely with clients to improve the lives of many South Africans.

“I have had the privilege of serving several organisations that do amazing work in promoting and growing the engineering profession and enhancing the business of consulting engineering in South Africa, Africa and internationally,” says Jeshika Ramchund, Lead Engineer – Developments, for Bosch Projects. “Through my work, I have had the honour of representing my country on international stages and the chance to serve the engineering profession and our people. I also appreciate having the opportunity to be able to positively influence young professionals.” 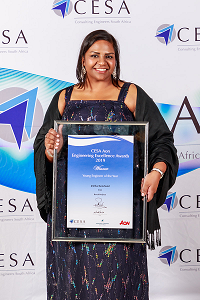 Jeshika is committed to expanding the Bosch Projects team’s reach into integrated and smart developments. With the support of senior management, Jeshika drives the Bosch Interact programme – an initiative that aims to develop young professionals in the business as the next generation of leaders to take the industry forward. The company launched this programme to enhance and encourage interpersonal skills, professional development and participation in industry initiatives.

Jeshika is the immediate past chairperson of the Group of African Member Associations (GAMA) Young Professional’s Forum, an executive committee member of GAMA and a member of FIDIC YPFSC and the FIDIC Conference Advisory Group. she has been actively involved with Consulting Engineers South Africa (CESA) since 2008 and has served CESA as chairperson of the Young Professional’s Forum and a council and board member. Jeshika has recently been appointed to the position of chairperson of CESA’s Gender Diversity Forum, aimed at driving the diversity and inclusivity agenda in the consulting engineering space.