With condition-based maintenance often reserved for only the most critical assets, SKF has launched a solution that can bring condition monitoring to applications that would previously have been out of reach.

SKF has further expanded its offering in condition monitoring with a compact, competitively priced system that is flexible enough to be used across a broad spectrum of applications and industries. The SKF Multilog IMx-16Plus will help more users of rotating equipment to reduce unplanned machine downtime, improve asset availability and optimise machinery operation. 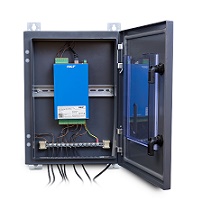 Condition monitoring has historically been restricted to the most critical assets. However, the SKF Multilog IMx-16Plus, which is based on the proven SKF Multilog IMx- 8, allows condition-based maintenance to be integrated in applications that would previously have been too costly to consider. With the ability to monitor everything from a single machine to an entire plant from a central location, the SKF Multilog IMx-16Plus integrates seamlessly with other devices (such as the IMx-8) to allow more extensive deployment.

The system receives condition monitoring signals – from vibration or temperature sensors, for instance – to offer early fault detection in industries including wind energy, marine, processing and machine tools. It monitors all types of rotating assets, from pumps and motors to fans and compressors.

Freddy Hernández, Product Line Manager, Surveillance Systems at SKF comments: “Higher asset availability is critical to efficient production. The SKF Multilog IMx-16Plus helps end users achieve this by providing early warning of potential problems. The system is flexible enough to adapt to many process environments and conditions, allowing it to be used across a range of industries. The product is also being constant developed, giving end users the chance to upgrade constantly with new, improved functionality.”

SKF Multilog IMx-16Plus features integrated connectivity via mobile data (GPRS and LTE) or Ethernet (RJ45 or Wi-Fi). As well as having 16 analogue inputs – typically for vibration sensors, with the option to accommodate up to eight directly connected temperature sensors, it also has four digital channels, for speed sensor inputs.