The Port of Durban has noted growth in volumes in the container, liquid bulk and dry bulk sectors in 2018, according to recent data released by Transnet National Ports Authority (TNPA). 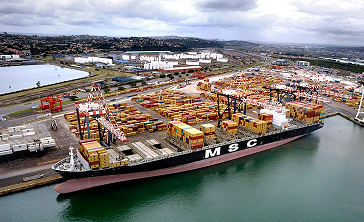 Liquid Bulk volumes grew 3.1% from 28.231 kilolitres in 2018 to 29 million kilolitres in 2019. This was mainly attributed to demand factors as well as South Africa being a net importer of crude.

The port also noted growth in its automotive throughput with imports growing by 4% and exports by more than 15% year on year excluding transhipment and coastwise cargo. The Port of Durban has handled a total of just over 487 000 units in 2018 which is the highest since 2013 when a throughput of 503 000 units was recorded.

Breakbulk volumes in 2018 were relatively on par with 2017 volumes. Throughput in this sector is erratic with some cargoes also migrating to other forms of handling such as the containerisation and dry bulk sectors.

Port of Durban Acting Port Manager, Nokuzola Nkowane, said: “The Port of Durban continues to work with terminal operators and other stakeholders to ensure improvements in terminal productivity levels for quicker ship turnaround times. Operational efficiencies are the focus to drive volume performance.”