Steam is used to heat raw materials and treat semi-finished products.  It is also a power source for equipment, as well as for building heat and electricity generation. But steam is not free. It costs millions annually to feed the boilers generating the steam.

Generally speaking, steam is a very efficient way to transport heat energy because the amount of latent heat required to produce steam from water is quite large, and steam is easily moved in pressurized piping systems that can deliver that energy at manageable costs. When steam gets to its point of use and gives up its latent heat to the environment or to a process, it condenses into water, which must be returned to the boiler for re-conversion to steam.

Several condition-monitoring technologies are useful for monitoring steam systems to determine how well they are functioning. Among those technologies is infrared (IR) thermography, in which technicians use thermal imagers to capture two dimensional images of the surface temperatures of equipment and structures. 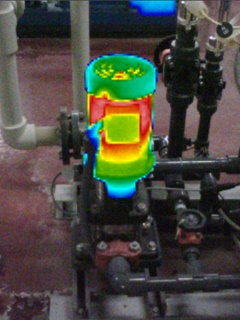 Using a combination of ultrasound and thermal inspections significantly increases the detection rate of problems in steam systems. Check all steam traps and steam transmission lines, including any underground lines. In addition, scan heat exchangers, boilers and steam-using equipment. In other words, examine every part of the steam system with a thermal imager.

What to look for?

Steam traps are valves designed to remove condensate as well as air from the system. During inspections, use both thermal and ultrasonic testing to identify

Steam transmission lines for blockages, including closed valves, and underground steam lines for leaks, heat exchangers for blockages, boilers, especially their refractories and insulation, steam-using equipment for any anomalies and recent repairs to confirm their success.

Consider creating a regular inspection route that includes all key steam-system components in the facility, so that all traps are inspected at least annually.

Larger or more critical traps should be inspected more frequently, as the potential for loss is greater. Over time, this process will help determine whether a hot or relatively cool spot is unusual or not and help to verify when repairs are successful.

What represents a “red alert?”

Water boils at 100°C making steam, which is routinely transmitted at high pressure, extremely hazardous, so any condition that poses a safety risk should take the highest repair priority. In many situations, the next most important kinds of problems to deal with are those that can affect production capabilities.

What’s the potential cost of failure?

The cost to an operation that completely loses its steam system varies from industry to industry. Among the industries that use the most steam are chemicals, food and beverage processing and pharmaceuticals. If the facility has performed no maintenance of steam traps for three to five years, expect 15 to 30 percent of the traps to have failed. So, if there are 60 medium-sized traps on the system, losses from “blow by” are estimated to be between R0,5m and R0,85m per annum.

To check steam trap performance, “sight, sound and temperature” are the dominant techniques. Implementing a basic annual inspection of the steam traps and associated equipment with infrared inspections will likely reduce steam losses by 50 % to 75 %. A sensible approach to a steam system management program is to establish repair priorities based on safety, steam/energy loss, and possible impact on production and quality loss. Whenever a problem is discovered using a thermal imager, use the associated software to document the findings in a report, including a thermal image and a digital image of the equipment. It’s the best way to communicate the problems found and to suggest repairs.

Make room on the report form to schedule a follow-up inspection. This can be something as simple as leaving a blank space labeled “follow-up thermogram” or entering an actual date. Plan the workload so that a follow-up inspection can be scheduled quickly after repairs have been made. Some thermographers leave the last Friday of the month as a day to do this. It not only gives staff a chance to validate the repair, but also to build good will with the crew that did the repair work. More importantly, it gives the time to find out what was actually wrong and perhaps even see the damaged components. This is vital to long-term growth as a thermographer.