SKF has supported Swedish floor grinding machine manufacturer, Scanmaskin, by developing a tailored radial shaft seal for its latest, most high-performing machine, in a record lead-time of four months.

The Scanmaskin World Series was developed with support from SKF’s application engineering team in Sweden and has an expected service life of up to 20 years. 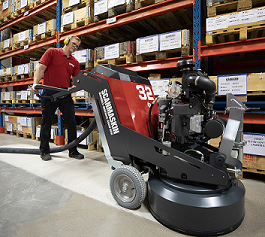 Paolo Bergstrand, CEO of Scanmaskin, says: “Professional floor grinders operate in harsh conditions, with dust a major issue for machine reliability and performance. The machines need to withstand being used on rough and uneven sources, without compromising on efficiency, calculated by the amount of surface area one can grind per hour of operation.”

Anders Jönsson, Sealing Specialist at SKF, says: “Requests to help develop tailored solutions are part of our daily work but what made this request so special was the short lead-time. We only had about four months to design, develop and manufacture a solution that met Scanmaskin’s demanding needs. Our application engineers proposed a Heavy Industrial Seal with an SKF Duralip sealing lip. Made from nitrile rubber, this type of radial shaft seal is also used in chemical mixers, steel mills and other construction applications.”

Nils Manne, Application Engineer at SKF, explains: “We needed to find a sealing solution that would protect the driveline from contamination.

It also needed to withstand damage which can occur during drivebelt changes as well as the high temperatures associated with continuous operation of the machine over long periods of time.”

Seals have a crucial impact on system performance. Life and reliability of what is often considered a simple component can make all the difference to a product and its efficient operation. SKF’s industrial sealing solutions include power transmission seals, hydraulic seals, fluid handling seals and machined seals.

SKF is a leading global supplier of bearings, seals, mechatronics, lubrication systems, and services which include technical support, maintenance and reliability services, engineering consulting and training. SKF is represented in more than 130 countries and has around 17,000 distributor locations worldwide. Annual sales in 2017 were SEK 77 938 million and the number of employees was 45 678. www.skf.com

® SKF is a registered trademark of the SKF Group.