One of the largest boiler inspections ever undertaken in South Africa using drones was recently completed successfully by Skyriders at Medupi Power Station in Limpopo. This was also the first time that the 794 MW Unit 6 at Eskom’s newest power station was subjected to a routine inspection using drones, following its synchronisation to the national grid on 2 March 2015.

While the rope-access specialist had completed smaller boiler inspection work for both Eskom and a major petrochemical company to date, the latest project was distinguished by its sheer size and scope, with Unit 6 a towering 80 m high.

In addition, a full internal inspection had to be conducted of the entire furnace area, right from the bottom up to the superheater elements. This was especially important as it was the first time that the boiler had been investigated properly since its start-up. 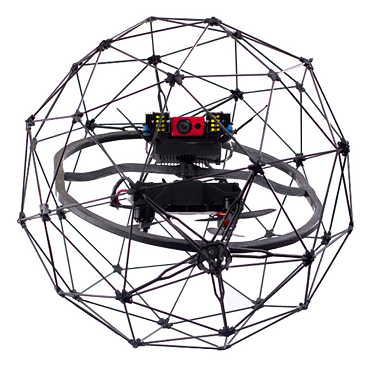 Elios SkyEye is designed specifically for these arduous conditions.

Skyriders Marketing Manager Mike Zinn explains that, right from the outset, the decision was taken to deploy the company’s proprietary Elios collision-tolerant drone technology. Imported from Flyability of Switzerland, the hi-tech drone includes a full HD camera, a thermal camera, and an onboard LED lighting system with remotely-adjustable intensity.

Hence an array of onboard tools is available for any lighting conditions. The drone can be brought into usually inaccessible places up to many hundred metres beyond the line of sight due to the fact that it is equipped with a wireless communications system with a live video feedback.

The collision-tolerance feature means the drone can enter furnace areas easily, and even go right up to a burner for close-up inspection, without any danger of crashing or causing damage to any elements. The drone itself is operated externally by a fully-qualified and trained pilot, obviating the risk of having any staff enter the boiler themselves. Needless to say, such a drone inspection is also much quicker and effective to carry out.

For the two-day Medupi project, Skyriders used two drone pilots, accompanied by a Level 2 boiler inspector and an inspection manager. “What made this project such a showcase for our Elios SkyEye system in particular was that our client’s site manager, who ultimately reported to Eskom, had attempted to use drone technology in Europe, with little success, and was therefore was initially skeptical about the drones ability to deliver in such a large boiler,” Zinn comments.

Skyriders opted to use Elios SkyEye because it is designed specifically for these arduous conditions. First of all, the boiler was switched off, and subjected to a forced cooling period so that the drone could enter safely. Thereafter, the drone was piloted carefully inside in order to carry out the full inspection.

“We had a specific checklist of components that we had to inspect,” Zinn elaborates. Skyriders then sat with representatives from the client and Eskom to properly evaluate the video footage taken by the Elios SkyEye drone during the inspection process.

“The fact that this project was such a resounding success is a particular vindication of our strategy to use the latest inspection technology available, in conjunction with our standard rope access services, to meet our clients’ needs in the most cost-effective and practical way possible,” Zinn concludes.