The rise of digitalisation and automation is amplifying the keen focus towards innovations such as robotics. When Atlas Copco became aware that Hoërskool Waterkloof ´s robotic team, known as Fifth Order, was looking for assistance to compete at the First Tech Challenge (FTC) in the USA from 24-27 April 2019, the company came to the fore in support of the learners.

FTC is an international competition, which sees students from grade seven to twelve work in teams to design, build, and program and operate a robot that will contend in a head-to-head challenge in an alliance format. The programme aims to develop learners’ science, technology, engineering and mathematics skills as well as enable them to practice engineering principles under adult guidance and mentorship. In order to participate in the competition the teams must raise funds, build a robot, learn Java programming and promote the competition and their team within local communities. 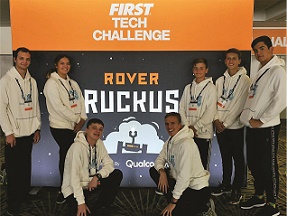 “Atlas Copco is always eager to assist communities and encourage an interest in mathematics and science amongst learners, so what better way to do this than to support a team from South Africa to represent us at the international FTC competition,” states Wendy Buffa-Pace, Group Human Resources Manager at Atlas Copco. “We sponsored branded Atlas Copco hoodies, caps and t-shirts for the Fifth Order team.”

Every year since 2011, Hoërskool Waterkloof has entered two teams into the local First Tech Challenge. Based on their interest in robotics, any student at the school can apply to be part of the team. But a prerequisite to be a team member is that students must be committed and available to work on the project every weekend, as well as over the October school holidays when the challenge begins and in March when the National Competition is held.

The founding team chose their name after the First Order from Star Wars and used a TIE fighter as the team logo; both have remained with the team till this day. Aged between fourteen and sixteen, the current team includes Stephan de Villiers, Eben Steenekamp, Francois Delport, Juan Oosthuizen, Tianette Booysen, Marco Terblanche, Joshua Harmse, two coaches and a mentor.

When the FTC challenge for the season was released in October 2018 Fifth Order began with their preparation, designing and building their robot ‘Phoenix’, programming it within Java using the LinearOpMode as well as marketing the team and competition in the local Pretoria newspaper as well as on Facebook and radio. Initially Fifth Order created five different prototypes which were created from cardboard and 3D printed parts to test different designs and features. Fifth Order utilised TensorFlow’s advanced machine learning algorithms to program the required autonomies functions.  Fifth Order finalised the design for Phoenix in January 2019 and worked 3-4 days a week over the next two months to have the robot ready for the local National Championship which took place on 02 March 2019 at Sci-Bono Discovery Centre in Johannesburg .

During the first 30 seconds of the game, known as Rover Ruckus, the robots are required to perform specific tasks autonomously. Fifth Order won the robot challenge, scoring the highest overall point which earned them selection to represent South Africa at the International First Tech Challenge in Detroit, Michigan, USA.

The innovative robot features a single mechanised extendable and retractable arm that is fitted with a collection unit to collect the game items and score points. The arm is also used to latch the robot to a hook from where it is lowered onto and off the playing field at the start and conclusion of the game. This is achieved by using a smart servo attached to the arm that opens and closes a latching mechanism. In the build-up to the international competition the team replaced Phoenix’s motors controlling the wheels and mechanised arm with stronger versions and refined the design of the collection unit.

The 2019 competition saw 160 teams from all over the world divided into two divisions – Edison and Ochoa – to battle for the coveted title. The Fifth Order team finished 37 out of 80 in the Ochoa division. This is a great result considering that this was Fifth Order’s debut at this competition which is widely known across America. “Taking into account the high calibre of the American teams who received full corporate sponsorships are are coached by engineers that work in practice and have participated in the competition during their school years, it makes our local team’s achievement all the more remarkable,” notes  Spokesperson for the Fifth Order team, Mireille Steenekamp.

“By comparison, our team was limited to the funds we as parents could contribute. Our coaches are two of the parents who volunteered their time even though they had no previous experience with the competition. We had to cut sheet metal by hand for robot construction and most of the parts are second hand from the team that participated in last year’s competition. We are very proud of our rooky team who overcame all these challenges through hard work and tremendous team spirit.” The team will be showcasing their advanced robotic skills at the ‘My Future 4.0’ Expo held on 18 May at the Ticket Pro Dome.

“Atlas Copco is extremely proud of Fifth Order for their dedication and exceptional robotics capabilities. It is not about winning or losing but rather that this team of intelligent teenagers has flown the South African flag high and paved the way for other learners who may also see their future in robotics,” concludes Buffa-Pace.