Losing her beloved grandmother during her final matric exams forced Thabiso Ndlovu to suppress the pain and soldier on in pursuit of the results she knew would make the women who helped raise her proud.

Hailing from Umlazi in KwaZulu-Natal and an attendee of the Engen Maths and Science School (EMSS) hosted weekly at the University of KZN, Thabiso eventually achieved seven distinctions, with over 90% in both maths and science.

This set of impressive results secured her top spot amongst the 532 Engen Maths and Science School leaners who wrote matric in 2018. Most importantly, however, it also secured her a place to study medicine at the University of Cape Town in 2019.

“Qualifying as a doctor and making a difference will be the fulfilment of a life-long dream,” says Thabiso.

A fear of being average is what pushes her to do her best in everything she undertakes, which will surely hold her in good stead at UCT. “I hope to successfully achieve my goal of being a doctor. I also want to combine the use of computers and medicine to effectively practise the betterment of the lives of all people.” 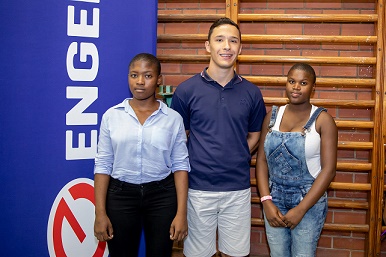 Thabiso, who lives with her mother, aunt, cousin, two uncles and a brother in P section Umlazi, says her family have always been her motivation. “We have very little to live by, relying mostly on the small income from my aunt and social grants but everything I do is for them,” she says.

Her advice for the matric students of 2019 is to do their best and approach their studies with a clear mind and a calm attitude. “Above all, prayer is most important,” she counsels.

There are nine Engen Maths and Science Schools in South Africa offering weekly supplementary classes to learners from grade 10-12, including one each in Cape Town and Gauteng, three in the Eastern Cape and four in KwaZulu-Natal.

A total of 532 matriculants from across South Africa benefited from Engen-backed extra classes in English, maths and science last year, achieving an impressive 93% pass rate overall, against the national rate of 78.2%.  Two of the four EMSS centres in KwaZulu-Natal, Fairvale and Ganges boasted 100% pass rates.

The top three positions nationally in the 2018 EMSS class also all hailed from KwaZulu-Natal, with Velabahleke High School’s Thabiso Ndlovu topping the class both nationally and provincially, followed by Zizile Msomi of Zwelibanzi High and Brenton Johnson from Grosvenor Boys’ High.

Adhila Hamdulay, Engen’s Corporate Social Investment Manager, says the company is delighted to see Thabiso get the chance to pursue her medical studies. “Thabiso is a prime example of future leaders that the EMSS programme aims to assist, with a view to not only see them achieve personal success, but also to tackle the bigger issue of helping address key national skills shortages in the engineering, medical and other technical fields.

Adds Hamdulay: “At Engen, we strongly believe that we have a responsibility to help young people realise their full potential, and we feel enormously privileged to have played a role in Thabiso’s impressive achievements.”

“We identify, support, reward, recruit, train and develop high-potential candidates for fulfilling careers in skills-challenged fields, in support of SA’s transformational agenda and Engen’s own business.  We strongly believe that we have a responsibility to help young people realise their full potential, and we feel enormously privileged to have played a role in their impressive achievements.

“We are so incredibly proud of these learners, who epitomise the quality of the young people we work with around the country every year. Our ultimate reward is to help set them up to pursue stimulating careers that won’t only benefit them personally, but also the economy as a whole,” adds Njokweni-Magida.

Engen congratulates Thabiso and the EMSS class of 2018 and offers a well-deserved round of applause to all the learners and teachers.